Tequila of the Month || Chinaco 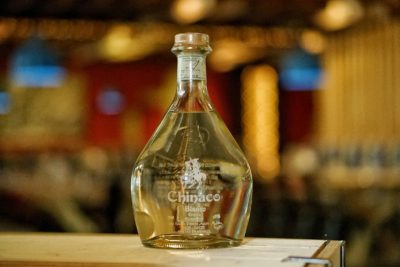 EACH MONTH AT HOT TAMALE WE SPOTLIGHT A DIFFERENT TEQUILA FOR EVERYONE TO ENJOY, FOR AUGUST WE HAVE CHOSEN TO SHOWCASE CHINACO.

LEGACY OF THE WARRIOR SPIRIT

Chinacos were wealthy landowners during the eighteenth and nineteenth centuries who, out of necessity, became legendary fighters. The Chinaco warriors tirelessly defended Mexico during both the War of Reform and the French Intervention in the mid-1800s. They were cheered on by the people of Mexico, feared by those they faced and renowned for their bravery and heroism. Their leader was General Manuel González. The history of Tequilera La Gonzaleña, the home of Chinaco Tequila, begins in 1856 when General González acquired land in the Mexican state of Tamaulipas.

Almost a century later, in 1966, a hurricane devastated the plantations of Tamaulipas – which, at that time, were devoted to growing grains, vegetables and livestock – leading residents to plant an alternative and more lucrative crop. Tequilana Weber Tipo Azul was an ideal option as it was in growing demand and flourished in the climate and soil conditions of the region. Guillermo González, the great-grandson of General Manuel González and successive leader of the González family, was Mexico’s secretary of agriculture at the time. He agreed to sell the region’s blue agave plants to a major tequila producer in Jalisco, then the only Mexican state that could legally produce tequila.

When the agave plants matured eight years later, the tequila producer refused to pay Guillermo González the agreed-upon price. Left with no buyers for the agave, and refusing to sell them for less than promised, González became a warrior in his own right. He battled against the larger distillers and successfully lobbied the Mexican government for an amendment that would allow for tequila production outside of Jalisco.

After four years of petitioning, Tamaulipas received Denomination of Origin status and this gave rise to Tequilera La Gonzaleña in 1977, the first tequila distillery in Tamaulipas, and home of Chinaco Tequila. Named for the band of warriors who fought tirelessly a century prior, Chinaco Tequila has come to symbolize, particularly for the small producer and jimadores, the battles waged against those larger factions of tequila producers.

The great great-grandsons of General Manuel González proudly carry on the family’s renowned tequila-making traditions. Under their direction, Chinaco Tequila continues to win over new admirers and has earned a hard-fought place among tequila’s elite.

Chinaco Blanco is distinguished by its fresh 100% agave taste. Blanco is bottled within five days after distillation for a remarkably fresh, clean taste that’s perfect for sipping, making premium margaritas or adding to mixed drinks.

Pristine clear, Chinaco Blanco has a lovely bouquet of pear, quince, dill and lime, tinged with aloe. It’s very clean, smooth, fresh and bright on the palate, with exceptional depth and balance, followed by a smooth, long, lingering finish.

CLICK HERE to see our previous Tequila of the Month