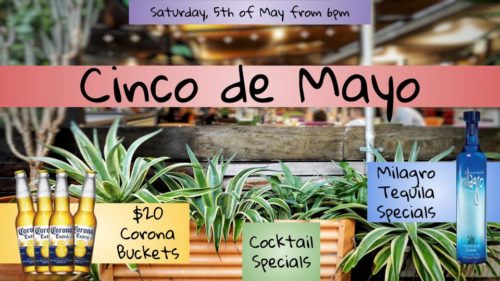 Cinco de Mayo, or the fifth of May, is a holiday that celebrates the date of the Mexican army’s 1862 victory over France at the Battle of Puebla during the Franco-Mexican War. Cinco de Mayo 2018 occurs on Saturday, May 5. A relatively minor holiday in Mexico, in the United States Cinco de Mayo has evolved into a commemoration of Mexican culture and heritage, particularly in areas with large Mexican-American populations.

We will be celebrating it in the same way and commemorate the Mexican culture in Darwin. Come in and learn about different Mexican traditions including tequila!