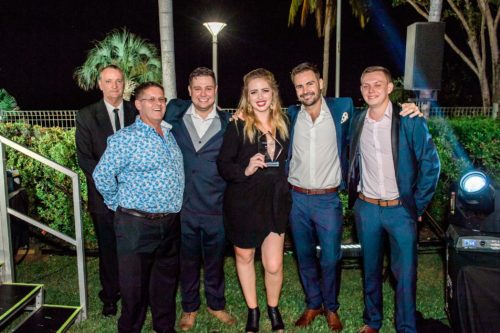 On the 29th of May Hospitality NT hosted the 2019 Awards for Excellence – we were very excited to take home three awards on the night!! Best Overall Restaurant, Chef of the Year & Bartender of the Year.

After years of telling everyone Tacos & Tequila were the key to success we finally found out they were the key to the best restaurant in the Northern Territory!! We were extremely proud to take out the award of Best Overall Restaurant – so thank you to our team; past & present and to all of our amazing guests who we have served over the past 6 years.

Chef of the Year

If ever there is a chef that deserves some recognition in the Northern Territory, Martin is definitely one who does. Congratulations Chef Martin, you deserve it!

Martin is a self-described ‘burner’ who’s life has been cooking. He is absolutely passionate about the industry first and foremost, which is shown by his role as president of the Australian Culinary Federation NT and by attending pretty much every hospitality event, be it bartending competitions or supplier organized trainings and demonstrations. Hot Tamale recently was awarded Two Chef’s Hats from Gaullt et Mileau.

Whilst on a recent Chef trip down south Martin met Brian Steele. He is a writer & food critic for Gourmet Traveller AFG & Gaullt et Mileau Food Guides. He said at Chef’s Conference at Healsville in the Yarra Valley that Hot Tamale was the best Mexican he had eaten & raved about the food we put out.

Australian Culinary Federation is the national body dedicated to promoting camaraderie and culinary education of chefs, cooks, apprentices & culinary students. It is affiliated to the World Association of Chefs & is developing a standard for chefs Nationally & Internationally. We do competitions for cooks of all standards & have many competitions throughout the year like Nestle Golden Chefs Hat, a competition for under 25s that has a regional heat & national final, It has been running over 30 years in Australia & longer overseas.

ACF offer advice & mentorship to all involved in the industry & Martin regularly looks after young chefs throughout the country when they have issues around kitchen work & all that entails. Martin hosts a young chefs club locally & also has built an awareness of ACF existence in the NT, being the president of our chapter for over 3 years.

Martin has also personally competed on the National stage in National Chef of the year & spent his time promoting all things food related around the NT. Martin is asked to judge several competitions around Darwin and also nationally at Fine Foods Australia & Food Service Australia. He took youngsters to Hobart for the National Apprentices Competition & twice to Nestle Final as team manager. Martin is at FSA again this June & Fine Foods in September.

Bartender of the Year

Alex Johnston has been Hot Tamale’s Bar Manager for over two years and has achieved so much in those years. He has made a name for himself bartending on a national level and brings creative and exciting ideas to the venue & cocktail competitions that he enters.

His winning cocktail was inspired by local produce in the NT

Sanguku Furu (to give back)

Bartender of the Year (Finalist)

Matt Zarimis, one of our head bartenders who has been with us since opening day 2012 was also in the TOP 3 for Bartender of the Year!! Congratulations Matt.